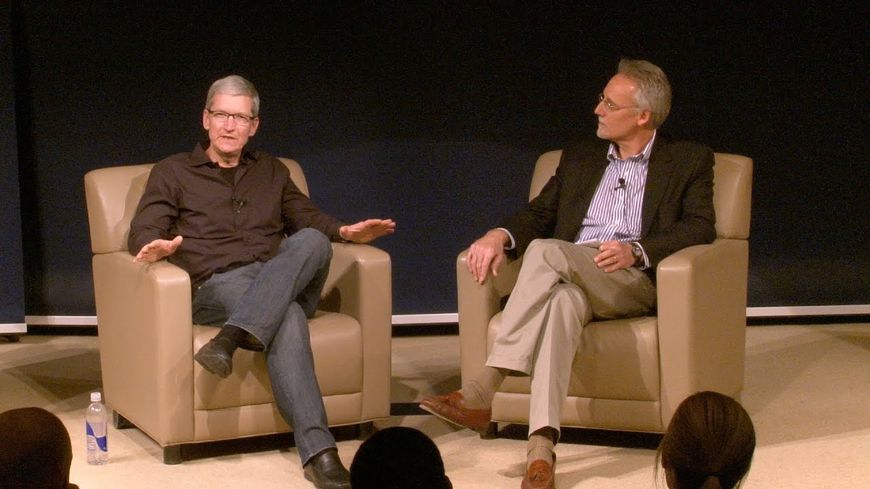 Apple CEO Tim Cook discusses the 25 year plan he developed while a student at Duke University's Fuqua School of Business and why you should veer away from such plans. Cook spoke as part of his class reunion at the school.(www.fuqua.duke.edu)

"Explore everything. Push the corners of your mind. Just get on this kind of continual learning roller coaster and see what happens."

This was among the advice Apple CEO Tim Cook shared with students at Duke University's Fuqua School of Business on April 26th. Back on campus for his 25-year reunion, Cook took part in an hour-long dialogue with Fuqua Dean Bill Boulding and the students in a jam-packed Geneen Auditorium buzzing with excitement to hear from the leader of the world's most profitable company.

The Apple CEO has embarked on a career far different than he had envisioned after graduating from Fuqua's Evening Executive MBA program in 1988. "For me the journey was not predictable at all. You have to find your own north star and stay with your north star."

As 450 Daytime MBA students prepared to graduate, Cook advised the students to heed Abraham Lincoln's words of wisdom: "I will prepare and someday my chance will come." Cook shared the three keys to his leadership at Apple: people, strategy, and execution. "If you get those three right the world is a great place."Students were able to get a unique glimpse into Cook's motivation, inspiration and leadership role models. Raised in the south and a witness to racial injustice, Cook described his admiration for Robert Kennedy and Martin Luther King Junior's bravery in risking their lives to fight for what they believed in. He has just three photos in his office: two of Kennedy and one of King.

Cook was asked when to follow strict principles of business theory and when to break the rules. His response stressed the importance of risks and learning from failure. "You should rarely follow the rules. What Fuqua teaches you so well is how to learn and how to collaborate. Write your own rules."This message resonated with first-year MBA student Shelby Hall. "I know this follows Steve Jobs' belief that Apple creates products which consumers didn't ever know existed," she said. "It was interesting to hear Tim Cook's perspective on how we should balance writing our own rules while applying the foundations of business taught here at Fuqua."

Login or Register to view video.
William Boulding
Dean and J.B. Fuqua Professor
William Boulding is the Dean and J.B. Fuqua Professor of Business Administration at The Fuqua School of Business, Duke University. His previous roles at Fuqua include Deputy Dean, Senior Associate Dean for Programs, Associate Dean for the Daytime MBA program, Area Coordinator for the Marketing faculty, Co-Director of the Teradata Center for Customer Relationship Management, and Academic Program Director for both the Marketing Leadership Forum and the Advanced Management Program.
MORE VIDEOS View All